Allo. 8D As you see by the title, what, oh what, dear friends, are your favourite pairings in the series? It's always an interesting topic.

XD I think some of you know by now that ArnoldxHelga is my OTP.

My "secondary" OTP is most definitely GeraldxPhoebe. Sure they may not be as fiery or passionate or chaotic as their best friends, but they are such a cute and sweet couple!!! <3 I admit, hearing of them at first when I got back into the series, I saw that a lot of people were pairing them together and needless to say, I was confused. As a kid, I never saw the episodes where they were together or holding hands, so I never thought of it further. Silly me! But now I see they're great for each other! And Craig Bartlett himself said that they were an official couple. X3 Especially in "The Patakis", they were supposed to be dating there, too. So yeah, these two are so cute! They obviously care for each other, and sure, no one nor they speculate the fact that they are a couple, but it's definitely there. They're just more subtle about it and it's often overlooked. But hey, they hold hands like it's second nature! It's obvious they're comfortable with each other. Awwww....<3

And plus, in "Arnold's Thanksgiving", while it's being announced that you should be thankful for what you have, Gerald and Phoebe are holding hands and they smile at each other. AWWWW!! <3

All righty, and here are some other pairings I like. 8D I pretty much just let everyone else do what they want, since ArnoldxHelga and GeraldxPhoebe are my two main OTP's that MUST be together...in my opinion. xD

What about you guys?

My number one favorite pairing is, and always will be, Helga x Arnold

They are ADORABLE and totally AWESOME <3

And my number two favorite pairing at the moment, thanks to SquirrelTamer, is Eugene x Curly

At first, I was confused

But it makes total sense!

And then there's Phoebe x Gerald of course, they are cute, but a little too cute I think

Don't really like Curly x Rhonda.. I made a music video about those two though XD
https://www.youtube.com/watch?v=YM4UZsqc3oM

OwO High-five, fellow fan! xD I agree, they're adorable and totally awesome. They have the best of both worlds. Fiery and passionate, and yet they can also have moments of just quietly enjoying each other's company. ^w^

Ah yes! Gerald and Phoebe are too cute for words. <3 It's true they may not have the raging fire and passion and adventure, but they do have such a sweet and caring relationship, and they're really good for each other. It's nice to have pairings that are more soft and sweet. C:

EugenexCurly? Huh, that's certainly a strange pair. But hey, I respect that you guys are into that! 8D

HELGA! HELGA! HELGA AND ARNOLD!
I LOVE THE VID!
IM RUNNING UP AND DOWN MY ROOM!
OW! I HIT THE WALL!
THIS IS NOT ON CAPS LOCK!
HAVE YOU NOTICED THAT EVERY HA! COUPLE IS OPPOSITE TO EACH OTHER!
RHONDA AND HAROLD! RHONDA IS CLEAN SNOB AND HAROLD IS A DIRTY SOMETIMES NICE SLOB!
OPPOSITE!

Now onto the topic at hand...

Zen, my favorite cooples are pretty much ze same as yorn, NintendoGal55.

And I know! EugenexCurly? Weird... I found out about that about a few days ago. I don't like it too much. But if ya'll wanna roll with that, that's cool, I guess.

But if anyones still curious about my fave couples, go to my Fanfiction page. I have a list of them on there.

Wow, the clowns are even dumber and frankly... CREEPIER than the stupid flower icon. *Shudders* 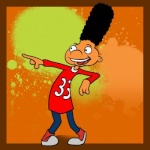 Call me weird (No seriously, do! It's my username), but that doesn't sound too bad.

And I'm glad ya like the whole "Chocolate and Egg Rolls" thing. I actually got that off a fic I read once. Can't remember the name though. *Scratches head* But I remember it was about Helga and Phoebe having a conversation on how Pop rocks (Helga) and Ice cream (We all know who THAT is) wouldn't go good together, and Phoebe would object and say that they WOULD go together good. Then Phoebe would go on about how everyone is after Chocolate (Gerald), and how egg rolls (Phoebe) would never be able to get bite out of him. LOL!

That was always entertaining. I'll see if I can find the fic. I saved it... but I've saved alot of stuff and it'll be difficult to find. *Huffs at self for favoriting so much junk* But we'll see.

Oh yes! I think I read that fic too! That's where I got the pop rocks from. >w<

now im gonna skydive into a cage match with a bear while im checking my messages! toddles!

Arnold and Helga rocks! NO they boulder!

Arnold : nice and sweet STRAWCHERRY in my world they exist
Helga: rough oround the edges but sweet on the inside A SEMI-BURNED MUFFIN!

I'm the Queen of Weirdness!

You're the Queen of Crazyness!!

And together we rule the Kingdom of ODDNESS!!!!

YAY! You burned calories! Take that Betty Crocker! And all your sugary, chocolate coated cakes and cookies!

Heck! I'm Fourteen and they're scaring ME! They're gonna be makin' Grannie's pee their pants (More than usual) and five year olds pass out cold! OH! Better idea!

^Those are my tops.


HOWEVER I also sort of dig:

Rhonda/Curly (if only she'd give him a chance)

I sort of like Brainy/Helga, but ...it always comes back to Arnold/Helga in the end for me.

haha just like the previous posts above me, I also have Arnold/Helga as my fav

XD The other two generations need love, too! Agreed.

Who WOULDN'T love those pairings? Lately, I've developed a soft spot for Phil/Gertie. They're amazing.

I also love Gerald/Phoebe. Their relationship is calm and more mellow as opposed to intense, like Arnold and Helga's. It's fun to explore the contrast between the two relationships.

I don't see Brainy/Helga working out, but I can see them becoming friends when they get older.

There are some really good Arnold/OC fics; they're really just oneshots about Helga having to accept the fact that Arnold will never return her love (The fics usually involve Arnold and Helga growing apart over time, and by the time Helga realizes she still loves Arnold, he's found someone else). Though I LOVE Arnold/Helga, it's fun reading these fics for a breath of fresh air and seeing different "What if?" scenarios. I find it true to life that people grow apart over a span of time. Even the strongest friendships and romances between two people can grow apart eventually - changing circumstances, different interests that've evolved over time, long distance, among other factors, can cause these rifts. Also, though Craig Bartlett stated that Arnold and Helga are meant to be, there's always the possibility of Arnold having another girlfriend in "The Patakis", in the new location where he moved to. Even though Helga writes letters to Arnold and doesn't send them, I can imagine Arnold writing to Helga, and possibily mentioning his girlfriend or the fact that he dates other girls in his letters to her. You can only imagine the heartbreak this would give Helga (What can I say? I love good Helga angst). Likewise, I find Arnold, and even Helga, dating other people during their time apart to be realistic as well. I find there to be a lot of wisdom in dating a variety of people before either finding the right person, or being with him or her; by dating a variety of people, you become more sure of what qualities you want your future partner to emulate. By mentioning an Arnold/OC pairing, I'm not trying to get under the skin of those who like Arnold/Helga together, but I think it's an intersting route to explore and I see it plausible for Arnold and Helga to date others during their time apart, though I see Arnold being more active on the dating scene than Helga.

I'm not a fan Harold/Rhonda, even though the "Love and Cheese" episode cracks me up with the two of them in the swan boat together. I also can't stand Arnold/Lila; then again, I don't know of anyone who's particularly fond of that pairing.

Call me weird, but I do love the idea of Arnold/Rhonda and I think the two of them would be a great couple; they would go far by combining Arnold's ethics and strong moral ground with Rhonda's style and connections. Pyrex Shards on fanfiction.net has written a really good fanfic with an Arnold/Rhonda pairing. Even though the fic is mostly about Helga's fear that she will lose Arnold forever to Rhonda and her despair and heartbreak concerning that, the fic is written wonderfully and the chemistry between Arnold and Rhonda is quite excellent. You can find the fic here. It's still a work in progress, but it's good.

Uh...I hadn't really considered Arnold/Rhonda, but I don't think I would mind it. To me it's right in the middle of Arnold/Phoebe (which isn't objectionable, but I find boring) and Helga/Arnold (which I prefer, but could be a bit...too exciting, as in there might be a bit too much to clean up and take care of before they could reasonably be together).

Lol, Arnold/Rhonda makes me laugh actually. I can't imagine it lasting though. XD

nah, Rhonda's a bit too high maintenence for someone like Arnold.

Perhapsormaybe, you do have a point. I do think it could work, though. I don't think it's an *impossible* pairing.

Oh, I can't think of any pairing that's absolutely impossible, but some are certainly more reasonable than others.

when I was younger I always thought Rhonda liked Arnold
I bet i'm crazy !! XD

No, I remember considering that, too. You're not crazy.

No, I see it being plausible. I can see her liking him and not wanting to openly admit it, like Helga.

Funny; now that I think about it, Rhonda and Helga don't get along, but if Rhonda pined for Arnold secretly, then it would make she and Helga more alike than the both of them would care to admit.

Similar topics
» [Mai-Otome] TomoAri to the rescue~! (a.k.a. why this random crackship made it into my top favourite pairings)
» Overlayed blue and white vase (my favourite purchase to date)
» Favourite Phantoms
» Top 20 Favourite Stories
» Favourite NaruHina moment(s)