Just out of curiosity, what do you guys think of her?

It always struck me as very odd how some people portrayed her to be a bitch and often a slut (usually in stories taking place in teen years). I'm all for freedom of expression and exploring "What ifs", and even situations where it can lead someone to become a certain way. But really, I don't know, it just seemed weird to me.

Pretty much the only thing that bugs me about her is her "ever so" business. Yeah, saying "ever so" is good and appropriate for some instances, but using it one too many times (especially when reading it) can really start to get old. But other than that, you know. She's not my favourite character, but I don't hate her.

I do of course give her credit and a thumbs up when she was so kind enough to give Helga the role as Juliet, and also to keep her feelings secret. :3

How about the rest of you?

I kinda like her actually.
When I was young I didn't like her that much, but that was mostly because she stood between Arnold and Helga and I wanted them to get together.. and I didn't want Arnold to like-like Lila xD

I loved her audition for Eugene, Eugene.
And I always imagined her to grow up marrying Stinky and live long and ever so happy xD
Yeah, she can be annoying, just like Eugene, but they don't do it intentionally and it's the thought that counts, right ^^

I remember King Cheetah's version of Lila as a high-schooler, and that was pretty cool...but for some reason it doesn't really sit right with me. That's just my two cents.

As for Lila: she's okay, but I think the whole good-girl act is a bit affected. 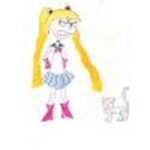 I don't really have that much of an opinion on Lila. She really doesn't get in the way of Arnold/Helga, but everyone seems to treat her like she's some great obstacle that Helga needs to beat out. But Lila doesn't LIKE Arnold and the only thing stopping Helga from confessing or Helga/Arnold from happening is Helga herself.

That said, I think she fits really well into the HA! world since her gimmick of perfectness is just as over the top as Rhonda's popularity or Nadine's bug-love. It's her "thing".

However, I find her dull as a character when all is said and done. She made an interesting foil for Helga in the show, but as a stand alone character? She doesn't really do much for me. I much prefer the Helga, Harold, Gerald, Rhonda types.

I think Lila has a lot of potential. Like the way she went bonkers in "Married". Helga, I think, sees Lila as an obstacle, and I like how she deals with it.

Well, I mean. Lila in Married wasn't the REAL Lila so much as she is what Helga wants to think of her - a villain. I really don't see the real Lila going down that crazy path.

Yeah, yeah. I think Helga's take on Lila is really fun ^.^ Like I said, her potential to be that crazy villain character, not that I think she ever actually would.

I'm a sucker for 'Villains'. They are always my favorites. That's why I like the idea. Not neccesarily bad guys, but the overemphasized, plotting, monologuing Disney villain thing.

Yeah, I never cared for the fact that people always portray Lila as being a total bitch/slut in fanfiction. I just don't see a reason for it and I don't see how Lila would suddenly become that way, as her kind motives do seem genuine.

As a character, though, I do think she's a bit of a Mary-Sue. She's someone who leads a pragmatic life and who sits by on the sidelines watching everyone else actively live theirs. Sometimes it seems like her character was created as a foil between Arnold and Helga. However, the Arnold/Helga/Lila love triangle was needed for Arnold to see that he and Lila wouldn't go good together and to a certain extent, it was retribution for Helga because she caused Arnold's crush on Helga by writing "Arnold Loves Lila" on the wall in the episode "Arnold and Lila". It also made Helga's feelings for Arnold more intensified, since you always want what you can't have.

Perhaps Lila's character would've been developed more in Season Six, since at that point, Arnold was completely over her, he knew how Helga felt about him, and she was no longer seen as an obstacle in Helga's eyes. Craig Bartlett said at one point that Helga and Lila might've become friends in "The Pataki's", since at that point, Lila ceased being the bane of Helga's existence, but who's to say, really?

Lila's easy to hate - especially when you're young. I think the fandom has really grown up in how they view Lila by this point. I also think a lot of that growth is due to Lila89, KingCheetah and Marcos on deviantart, but I'm not sure if there is an actual correlation there or not. At least, for me, Lila89 really made me step back and examine Lila as a character within the HA! narrative and she FITS.

I would challenge the idea that Lila is as Sue if only because she is very clearly MADE to be "perfect". But whereas when a person writes a Mary-Sue into their story they tend to A) focus all on the Sue and B) expect the reader to sympathize and loooove the Sue. However, HA! basically set the storyline up so that even today people still feel uneasy about Lila and love Helga.

Arnold falling for Lila is not a surprise. He likes unobtainable, pretty but not necessarily deep girls. And honestly, that's going to be a big problem with Helga/Arnold - Helga is NOT a pretty girl in any sense. And Arnold's going to have to learn to love her BECAUSE she is complicated and cruel and that's going to be difficult.

Lila in S6 would have been really cool to explore as a character. Truthfully, she never really got her own episode. From the moment Lila was brought into the series she was contrasted against Helga.

I think my issue with Lila was that there was no middle ground with her. Everyone (in the show, I mean) either loved her or hated her. You couldn't be indifferent. That put a bad taste in my mouth for her.

To me, that is what characterizes her as older. She picks up on that love/hate thing, and uses it. I'm not saying she has to be that evil person that she ends up being, but I can certainly see it most of the time. Honestly, I never got enought of her in the show to make a full judgement, so I don't hate her, she's just not one of my favorites. I do love to write her into things, though, as Helga's foil.

Growing up I didn't like her. These days, not only do I adore the character, I find myself sympathizing with her. While I still can not stand her with Olga (the sweetness mixed with Olga's flair for the dramatic is just too much...), she's a genuinely kind character who got way too much flack for 'getting in the way'. I remember I started coming around to her after "School Play". Not many people would step down from a part just to allow someone to kiss their crush. That is terribly sweet.

I find it frustrating so many fics try to paint her as a villain. The only person in the show who ever treated her as such was Helga, and as much as we may adore Helga, fact is...Helga was always more of a villain than Lila could have ever been. She was just a sweet girl who had the misfortune of getting in shippers' ways.

I'm not annoyed by her like other people, but I do not ship her with Arnold! I ship Arnold with Helga of course!

I like Lila. I feel like she's really misunderstood. I mean, just listen to what she sang for her audition in Eugene, Eugene. Or when the girls went over to her house to make fun of her more but ended up finding about her home life.
I think Helga thinks of Lila as a friend, despite how she acts sometimes (this is Helga we're talking about, she gets annoyed easily and she does see Lila as an obstacle since Arnold still like-likes her).
Lila, overall, is very kind. She kept Helga's secret and even gave up the part of Juliet for Helga.
Of course, like everybody else, she has those little quirks that others won't like. Her constant use of "ever so", her sweetness (sometimes it's a little too much), and the fact that Arnold like-likes her (although that's not something she can really change).
I guess the biggest reason she's unliked by most is because of Arnold's crush on her. But, as you can see, she is also widely liked. Maybe not as much as she is disliked, but there are still people that think she's a good person.

I take the good old fashioned Pataki stand on Lila. An air headed, pretty but shallow innocent farm girl stereotype who has a billion problems worse than us, and yet somehow manages to act all perfect like Cinderella.

She annoyed me to no end. The 'ever so' thing made me want to fast forward scenes with her in them.

Although, what she adds to the story is really okay. A rival, a secondary character with depth, etc. But I personally hate her.

I should clarify, I hate her stereotype and the fact that she could possibly be so happy and perfect under the pressure of her obviously lacking home life.

I would have liked if they'd gone into more depth with her struggles, or see if she was really TRULY happy and kind all the time.

Also, I'd never ship Lila with Arnold only because she made it evident she doesn't like him,

I used to Hate Lila. Especially when I was a little girl growing up. In recent years however, I kinda like her as a character now. I don't understand all the hate that she gets, to be honest. :/ I mean really, just because Arnold had a ''crush'' on her... That in my opinion, is a poor reason to hate a character. I used to hate her because of that reason, and the other reason that she is somewhat of a Mary - Sue, which really, Lila isn't. If anyone's a Mary sue on that show it is Olga. (Which I don't really like Olga. She is kinda annoying.) So now I grew to enjoy Lila, especially after seeing ''Ms. Perfect.'' (I think that was the first episode that Lila appeared in. Correct me if I'm wrong.)
So yeah, those were just my thoughts on Lila. Not bashing anyone here that doesn't like her, or anything like that.